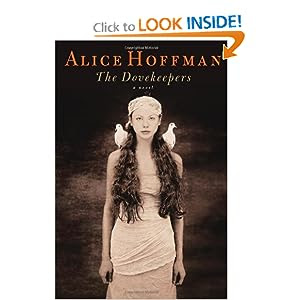 WOW!!  That's what I have to say about Alice Hoffman's latest release, The Dovekeepers.  This book was amazing!  We've been studying Rome, the time of Christ, and the Middle Ages that followed, this year in history.  A couple of months ago we learned of a place called Masada.

Masada is a massive fortress in the Judean Desert, along the Dead Sea, about 30 miles southeast of  Jerusalem.  It was built around 35 BC on a steep plateau by Herod the Great as a refuge for himself in the event of a revolt.  Approx. 100 years later, around AD 66, at the beginning of the war between the Jews and Romans, there were some Jews who thought they shouldn't fight the Romans.  These Jews fled and thought their best defense would be to hide from the Romans.  Eventually after wandering on the run in the desert for some years, they discovered Masada and decided to take refuge there under a leader named Eleazer Ben Ya'ir.  The account of Masada was recorded by a Jewish historian, Josephus.

In the beginning, it was heaven on earth, as for many of these Jews, it was the first time in their lives they were free of Roman rule.  They were free to worship and pray as they chose.  They were free to be who they wanted to be.  Years earlier, Herod had cut huge caverns and cisterns that would hold years worth of rainwater.  He stockpiled food supplies in great storehouses.  He also added two grand palaces to help him fight boredom should he ever be stranded there.   So upon arrival, the Jews of Masada were well provided for.  However, due to the large number of Jews at Masada and the dry season in the desert, the resources needed to be rationed and did begin to deplete.

In time, the Roman Emperor got word that nearly 1000 Jews were seeking refuge at Masada.  He sent multiple legions to stomp out these Jews who would not submit to Roman government, without success.  Masada was built on such a steep rocky cliff that it was nearly impossible to get to.  As the Roman soldiers attempted to scale the rocky cliffs, the Jews above would shower them with rocks and weapons. Time and again these Jews defeated the Romans until someone in the Roman camp came up with the idea of building a ramp to the top.  Using Jewish prisoners, the Romans erected a massive ramp of earth and wood over brutal terrain.  It took them seven months.

When the Romans completed their ramp around AD 73, they pushed and pulled weapons to the top.  One such weapon was a battering ram, which they used to knock down the outer walls of the fortress.  However, due to the weight of the weapon, part of the ramp collapsed.  The Romans were humiliated by this and set fire to the wooden gates of Masada.  But they were determined not to quit.  As they withdrew for the evening, the Masada leader,  Eleazer Ben Ya'ir, encouraged his followers to burn all their possessions and commit suicide, rather than be captured and taken back to Rome as prisoners.

Eventually, when the Romans were able to gain access to Masada, they found over 950 dead men, women, and children.  The men of Masada slayed their own wives and children, then drew names to see which men would kill each other.  They believed the last man standing would take his own life as well as the burden of sin from the rest of the group into the fiery depths of hell.

However, the historical account of Josephus tells that 2 women and 5 children survived the massacre at Masada.  This is were Alice Hoffman's novel comes to life.  It's the story of the Jews of Masada and four women who were chosen to be the dovekeepers.  Yael, who's mother dies giving birth to her.  She's raised by her father, an assassin, who hates her and blames her for his wife's death.  Revka, the wife of a village baker, who watched the horrific murder of her daughter, so she's left to care for her two grandsons.  Aziza, who was raised as a boy and became an expert marksmen and fearless warrior, yet is torn by the passion she feels toward her fellow warriors.  And Shirah, who is wise in the ways of ancient medicine and magic and is accused of being a selfish witch who loves no one.  But in the end, her deep love becomes her undoing.

The Dovekeepers was wonderfully written in a historic sense.   Alice Hoffman even visited Masada and cited resources she used to create an accurate historic setting.  Tho the characters of The Dovekeepers are fiction, I found myself enthralled by their situations as they seemed believable, not only in historic context, but in the relational way of women to this day.  Their stories are so tragic, yet beautiful.

The Dovekeepers is one of my new favorite books.  It has left a great impression on me.   The bond between mother and child struck to my core.  One disappointment was the amount of sorcery and witchcraft Hoffman uses in her story.  However, I tried to draw on my past knowledge of this time period and  keep perspective in that people of this time and throughout the Bible did worship pagan gods and false idols.  I highly recommend The Dovekeepers for adults looking to gain knowledge of this time period in history as well as entertainment.  I would not recommend this book for children due to sensuality and witchcraft.
Melissa at 12:03 PM
Share