Upon reflection, I actually read quite a bit this summer all things considered. Reading in community is a big push for me. I love the accountability it brings, as well as the camaraderie. I find I am most productive when reading with a group.

Here's what I read this summer....

I finished A Practical Guide to Culture by Stonestreet and Kunkle in August with my CM Study Group. There were a few nuggets in this book, particularly if you are a media friendly family, and maybe more so if you are involved in public school. However, some parts felt like preaching to the choir because sadly I'm not sure those that need to hear the message are the ones picking up the book. Stonestreet and Kunkle do tackle some difficult cultural issues such as pornography, sexual orientation, gender identity, and entertainment from a biblical perspective.

There is a rhythm to the chapters so each is written in the same format, beginning with introduction, followed by bullet points or numbered action points, and closing with a review. This makes A Practical Guide to Culture an easy read, as it's in an understandable format. There are also study guide questions at the end of each chapter, which makes it a great book club or study group book.

Overall, I did quite a bit of underlining in the book and will use it for a quick reference if needed. I would most likely not read the book a second time, but would recommend it to those looking for ways to glean ideas on handling the cultural pressures on our kids today.

In June, I finished reading Beauty in the Word by Stratford Caldecott, in an effort to facilitate an online study group at Convivial Circle. I was really excited to finally read this book that had been on my list for some time. I've heard Andrew Kern, Martin Cothran, and Cindy Rollins all mention it at some point. Honestly, the book started really strong, but lagged for me toward the end. I don't know that Caldecott ever closed the circle in my mind. I was left wondering about a few points he brought up, but never finalized.

Overall, it was worthy in spite of being very philosophical. Maybe a second reading would better enlighten me. I would like to blog more about this book in the future.

The kids, Steve, my father, and I set out to read The Pearl by John Steinbeck in August. We enjoyed our True Grit study so much that we wanted to continue. I believe dad, Riley, and possibly Steve finished, but Ruben and I did not. It's still on my nightstand and I aim to get back at it this winter.

It's always so hard to see summer end, but I am left this year with extremely fond memories of reading Kristin Lavransdatter by Sigrid Undset with my Summer Schole Sisters. Undset's trilogy had also been on my want to read list for some time...maybe since I first heard Wes Callihan mention it on a Schole Sisters podcast back in Episode 14. I have been thinking about Kristin periodically since finishing the book.

Kristin Lavransdatter is set in Medieval Norway. It is the story of a life beginning with Kristin as a young girl and ending with her death as a woman, wife, and mother of eight sons. I must confess, I was not hooked after Part I, The Wreath. Instead, I was actually annoyed by the ignorant ways of young lovers. However, Part II, The Wife persuaded me and Part III, The Cross, totally sealed the deal!! I can't recommend this book enough and will definitely read it again at some point. 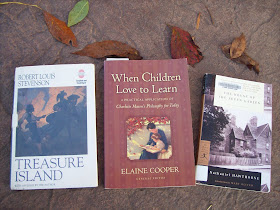 Our CM Study Group has moved on to When Children Love to Learn: A Practical Application of Charlotte Mason's Philosophy Today edited by Elaine Cooper. It's a series of essays from various educators contemplating the importance of a Charlotte Mason education and how to apply it one hundred years later. It's an older book, published in 2004, but certainly still relevant.

Riley and I are starting a High School Book Club this year. It's a spin off of the High School Community I facilitated last year. However, we will simply read and discuss classic works this year at Riley's request and not include composition, current events, Shakespeare, and recitation. Our High School Community was fabulous, but a lot of work. Other members agreed and were not able to continue in the same format this year. This book club will follow more closely to the Middle School Socratic Book Clubs that I led a few years ago.

Riley was instrumental in choosing the five titles we will read. The two fall books are: The House of the Seven Gables by Nathaniel Hawthorne and Treasure Island by Robert Louis Stevenson. I'll save the winter reads for another post.

My fall list is short, but plentiful. I have many other books on my nightstand. However, with the Journey: An Education for Life retreat not too far off, I'm not adding any others until winter. I will actually be speaking about Mother Culture and my reading habits at this year's retreat!
Melissa at 9:59 PM
Share