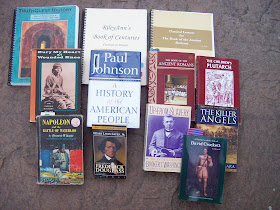 We are finished with our first term of the 2019-2020 academic year, but I wanted to follow through and post a preview of RileyAnn's Year 10. You can find Ruben's Year 9 here and Levi's Year 2 here.

Riley will continue to read through the AO Bible Reading Plan this year. She also finished copying Psalms last year and began copying Proverbs this year using the Journible Series.

Riley is studying two streams of history this year: Ancient Rome and American 1800's to the Civil War. She is using Classical Lessons for The Book of the Ancient Romans by Lisa Kelly for her Ancient Rome study and TruthQuest AOR II by Michelle Miller along with Paul Johnson's A History of the American People for her American history study. She has been assigned to read from the following books...

The Book of the Ancient Romans by Dorothy Mills
The Children's Plutarch: Tales of the Romans by F J Gould
A History of the American People by Paul Johnson
Landmark - Napoleon and the Battle of Waterloo by Frances Winwar
A Narrative of the Life of David Crockett of the State of Tennessee - autobiography
Narrative in the Life of Frederick Douglass - autobiography
The Killer Angels by Michael Shaara
Up From Slavery - The Autobiography of Booker T. Washington
Bury My Heart at Wounded Knee by Dee Brown

Riley is also picking and choosing books from our personal library at her leisure from the TQ guide to accompany her American History study. She writes narrations and keeps a book of centuries as she reads. 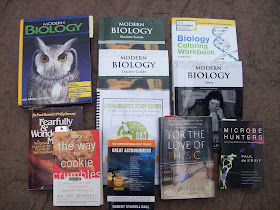 I decided to take a more traditional textbook approach for Riley's biology this year. She is using Modern Biology by Memoria Press. The lessons include reading from the text, online instructional lectures, vocabulary, question/answer, and coloring pages. In addition, Riley has been completing misc. biology labs with Ruben. She is also reading from the following books spread over the course of the year...

Microbe Hunters by Paul de Kruif - AO Year 9-11
Fearfully and Wonderfully Made by Dr. Paul Brand & Philip Yancey - AO Year 7-11
Great Astronomers by Robert Stawell Ball - AO Year 7-9 (Be sure to get the Diamond Books edition. It has the original illustrations and is worth the extra money.)
That's the Way the Cookie Crumbles by Dr. Joe Schwarcz
For the Love of Physics by Walter Lewin - Part 2 of Sabbath Mood Homeschool study guide

In addition to the literature that Riley is reading for History, she is also participating in a local High School Book Club that I'm facilitating. The students are reading the following titles and then gathering for discussion throughout the months of October through March...

Riley will study the following poets using the Poetry for Young People series and a variety of online sources, reading a different set of poets each term...

Riley writes daily narrations and is working on IEW Phonetic Zoo Level C for spelling. I would like to add a resource for more formal composition, but it may or may not be this year. Riley is also memorizing Psalm 23 for recitation. She uses PreScripts American Documents Cursive Passages and Illuminations from Classical Conversations for penmanship.

Riley started the year with Harold Jacob's Geometry, but because of my lack of time to participate, she became easily frustrated. A couple weeks into the term, I switched her to Teaching Textbooks Geometry. It is going much better. We opted against an online math course this year for financial reasons, but I still needed something to allow Riley to work independently. A friend gifted us TT and it's doing it's duty.

Fine Arts
I have outsourced our Term 1 and part of Term 2 Fine Arts this year. Each of our kids is participating in a local homeschool choir and art classes outside the home for the first half of the school year. Once their out of home semester has ended, we will include art and music study in our Morning Time.